This post is nothing like I planned. When I retreated to my rundown summer cottage on the North Fork of Long Island, I took along paleontologist Steve Brusatte’s new book, The Rise and Reign of the Mammals: A New History From the Shadow of the Dinosaurs to Us (2022). Brusatte’s a wonderful writer of popular science, offering graceful prose and clear exposition. His previous book, The Rise and Fall of the Dinosaurs (2018), is one of the best I’ve read in that genre (deserving a review of its own).

But, no review here, and, mostly, no mammals either, not even mice (which comfortably, if messily, overwintered in a couple of dressers). Instead, flora are at the center of this unplanned post (quite unplanned and it shows).

My intentions were deflected by three things. The first two, ironically enough, came directly from Brusatte’s own book in which he makes a couple of startling and important points regarding plants, observations that for me were point-of-view shifting.

The first comes when he describes how, in the late Carboniferous Period, amniotes found themselves favored over amphibians by dramatic changes in the environment, changes that precipitated the so-called Carboniferous Rainforest Collapse (roughly 307 to 303 million years ago). (Amniotes are those animals whose embryonic development occurs inside amnion tissue either within eggs or the uterus.) A much drier climate upended the rainforests whose flora were replaced by more drought tolerant plants. The overall impact on plants was devastating. It’s what Brusatte writes about the context of this plant extinction that was eye-opening for me.

All told, about half of the Pennsylvanian plant families were extinguished. This is one of only two mass extinctions recognized in the plant fossil record. (p. 15, emphasis added)

Wait, what? Plants have only been through two mass extinctions while animals, I know, have five on their resume? This Carboniferous one for plants does not coincide with one for animals while the second plant mass extinction does, coming at the end of the Permian Period, one of the big five for animals. This difference between the experiences of plants and animals was news to me. It also immediately raised the question, why have plants come relatively unscathed through events that devastated animal life, events like the end-Cretaceous extinction that occurred in the non-avian dinosaurs?

Brusatte cites a fascinating 2014 study by Borja Cascales-Miñana and Christopher J. Cleal in support of this assertion about plant extinctions (The Plant Fossil Record Reflects Just Two Great Extinction Events, Terra Nova, Vol. 26, Number 3, 2014). These authors suggest that plant taxa have proven, based on the fossil record, to be

far more resilient than animal taxa to many types of major ecological disturbance such as pollution caused by igneous province eruptions or bollide [asteroid or meteor] impact. (p. 198)

They posit that plants may be able to survive relatively short-lived environmental disturbances, that greatly affect animals, if plants’ seeds and spores have a viability that exceeds the duration of the disturbance.

This puts plants in a whole new light.

As if that weren’t enough, a second plant-related point Brusatte makes was also quite striking, ensuring that mammals would be displaced in this post. He describes the roles that plants have played in the evolution of animals. Yes, it’s a dance with all parties affected in some way, but Brusatte gives certain plants the lead. I was (to put it mildly) gob smacked when he called the widespread appearance of angiosperms (flowering plants) “the driving force of Cretaceous evolution.” (p. 135, Brusatte’s emphasis)

Like a maestro furiously sweeping her baton, the angiosperms steered the bugs, dinosaurs, mammals, and other animals in unanticipated new directions, leading an evolutionary movement that reshaped the earth. As a result, today angiosperms are dominant; they are, by far, the most abundant plant type in almost every terrestrial landscape on the planet. (p. 135)

The flowering plants wielded their evolutionary power, first as a food source which animals evolved to better take advantage of. Second, the angiosperms’ impact on insect evolution was profound; pollinators evolved to derive energy from the flowers. These pollinators, in turn, served as a new, important food source for animals, which (in this interconnected dance) evolved in new ways.

When Brusatte writes that angiosperms are “the most abundant plant type in nearly every terrestrial landscape on the planet,” he isn’t specifically referring to the woodlands which nestle my summer cottage, but he could have. It’s this setting into which I retreated to write about mammals, a setting that has whispered, “Skip the mammals, embrace the plants.”

After a wet spring and early summer, this area is awash in vegetation. Although old gnarled oaks tower over the woods, the deep, cool, green shadows here are cast by myriad maples – from the Norway maples with their almost translucent leaves when the sun is behind them to the broad- and dense-leafed sycamore maples. These are trees that, under most circumstances, draw my eyes, demanding attention as they reach for open spaces in the canopy. This year, though, it’s the small floral denizens of the woodland edges and the overgrown strip along the nearby railroad tracks that have really captured me.

For more than a decade now, during my summer visits here, I’ve noted in my copy of Peterson First Guide to Wildflowers of Northeastern and North-Central North America (1986), by Roger Tory Peterson, the species I’ve found along the same expanse of the wood’s edge and a bit of the land abutting the railroad tracks. My sole requirement for being listed is that the plant be in bloom. I recognize that this First Guide is very incomplete; Peterson called it “smaller” and “simpler” than even a guide for the novice. Still, it’s been a helpful place to start and I’ve added, on the inside of the back cover, the names of a few missing species that I’ve found. My overall count of species now exceeds 30. Not unexpectedly, after a while, new additions have become very few and far between, and my interest has waned. Except this year I discovered two species (new to me) that have appeared in robust numbers; neither can be found in the Peterson First Guide.

This small flower I’ve confidently identified only as to genus, Froelichia, whose common name is snake cotton. The genesis of that common name is fairly obvious. From a distance, an expanse of these white flowers waving on their extended stems do appear cottony (though not so up close). I suspect this is actually the species Froelichia gracilis, also known as slender snake cotton. The US Department of Agriculture’s Plant Databasee shows this species present on all of Long Island and the picture provided seems to match mine. 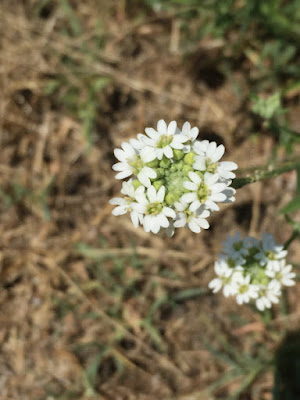 This is Berteroa incanacalled hoary alyssum which the USDA Plant Database records as found on Long Island. I turned to the Compact Oxford English Dictionary for an explanation of the common name which didn’t seem all that common. Something hoary is grayish white (or, and I didn’t know this, something “old and trite”). Alyssum is the (non-scientific) name for this kind of plant, coming from the Greek word alusson, which, in turn, means “without” (a) “rabies” (lussa). This harkens back to herbalists’ use of the plant. That said, there’s a large red warning flag attached to hoary alyssum because it is poisonous to horses.

And, so, what was planned as a paean to mammals is, instead, a salute to my new knowledge about plants: plants as survivors of many catastrophic events that decimated animal ranks, and flowering plants as drivers of animal evolution. Given those attributes, and the striking beauty (and bit of danger) of the wildflowers I discovered this summer, it seems quite appropriate to put plants at the center.