The heatwave which invaded England recently was no ordinary one.

At numerous locations the temperature exceeded 40°C (104°F) which, as far as we know, has never happened before in the British Isles. England definitely isn’t prepared for such temperatures, as Melissa Harrison makes abundantly clear in the Washington Post; an airport closed when the runway deformed in the heat, railway tracks buckled, the London fire department got so many calls it was their busiest day since World War II. The UK Meteorological Office advised people (especially the young, the old, and the sick) to go nowhere and do nothing but stay hydrated.

Not an ordinary heat wave.


The “central England temperature” record (CET, data here) is not the temperature at one location, but the average over a sizeable region you could call “central England.” While individual locations in England did meet or exceed the 40°C value, the area-wide average did not, although it did set a new record of 37.3°C (99.1°F).

The CET data report daily high temperature for 52,795 individual days from January 1, 1878 through July 19, 2022 when I downloaded it; they have posted data for a few more days since, but this includes the extreme heat of the last few days. Notice that the two hottest days in the record are this last Monday and Tuesday:

Surely this summer has had extreme heat, but others have had heat waves last a lot longer. The CET data enables us to calculate the “average summer temperature” for each year, with summer defined as June-July-August and the average of daily high temperature. Since the beginning of the record, it has shown an upward trend which is “statistically significant” — summers in England have been getting hotter on average, all the while showing incessant fluctuations from year to year:

The blue line shows the linear trend, which has increased by 1.4°C (2.5°F) since the record began in 1878, while the red line shows a non-linear smooth, which estimates an increase of 1.6°C (2.9°F) since 1878. They agree that the average summer temperature has gotten hotter, by about a degree and a half Celsius (about 2.7 degrees Fahrenheit).

In spite of the tremendous heat over the last few days, the “summer average” this year (so far) isn’t even close to being the hottest on record. That would be 1976, when the heat wave was milder but lasted longer. But the “great summer of 1976” didn’t get nearly as hot as this summer, it peaked at 33.1°C (91.6°F), a record-setter at the time, but a figure which has been surpassed in four separate years since.

We can record the hottest day of the year for each year in the CET record, and this is where 2022 sticks out like a sore thumb, a whopping 3.1°C (5.6°F) hotter than before: 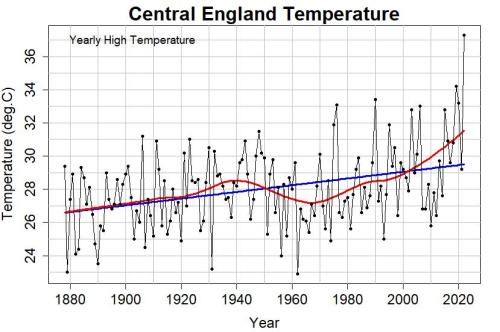 Again the blue line shows the linear trend (increased by 2.9°C = 5.2°F over the period of record), while the non-linear trend (red line) suggests an overall increase (of the trend, not the fluctuations!) of 4.9°C (8.8°F) since the record began. Again the blue line is “statistically significant” — the hottest day of the year has been getting hotter in central England. 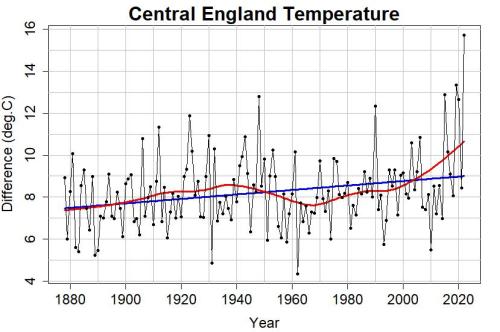 Again the blue line shows the linear trend, and again it is statistically significant. Lest you think that it might be an accident due to this year’s extreme value, note that if I omit this year entirely, the analysis still shows statistical significance. The difference between the hottest day of the year and the summertime average, has been getting hotter in central England — and this year is the pinnacle of that.

Again the red line shows a non-linear smooth, which indicates that the hottest day of the year has warmed by 3.3°C (5.9°F) sea than the average summer temperature in central England. Add in the upward trend in the summer average itself, and that’s a lot — from just the trend, not even including the inevitable fluctuations. Add those in, you get this year’s English summer. No ordinary heat wave.

The evidence suggests that climate change played a big role in how extreme this event was. There’s more happening — according to the data, that is — than just a mild increase in average summertime temperature. That’s why Melissa Harrison cautions that “We can’t downplay it,” because this was no ordinary heat wave, nothing like the 1976 summer, however hot that may have been. As she says, “Living through the British heat wave was unbearable.”

Yet some want you to think that what those in England felt with their own skin through their own sweat, what they saw with their own eyes, what they read on the thermometer, isn’t really real… this was just another “ordinary” heat wave, nothing of consequence. They insist that the 1976 heat wave was much worse, that we’re just “too sensitive” and have forgotten how to enjoy the heat, we’re always blowing things way out of proportion and imagining things, the whole thing was just a natural occurrence only “slightly” affected by global warming so we should stop being such hyper-sensitive snowflakes about it!

This blog is made possible by readers like you; join others by donating at My Wee Dragon.